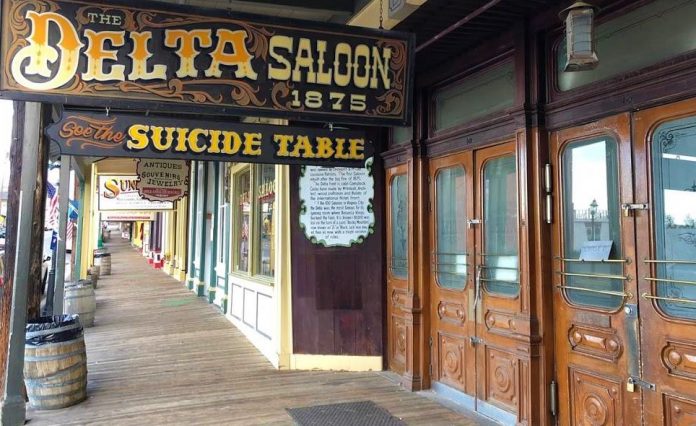 The historic Old West silver mining town of Virginia City, Nevada is one of the few towns in Nevada with no operating casinos. This is because the owner of the town’s two historic casino/saloons was denied a gaming license. 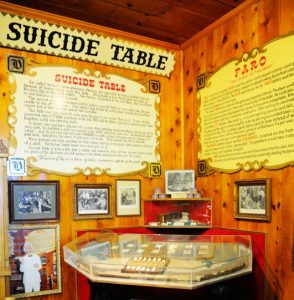 The California Gold Rush of 1849 resulted in a mass influx of ‘miner ‘49ers’ looking to strike it rich. Ten years later, the discovery of the Comstock Lode of silver ore put Nevada boomtowns on the map.

The town of Virginia City was an early Silver Rush boomtown with a population of 25,000 by 1863. The newly minted silver millionaires made vast fortunes mining silver, and the town prospered. Virginia City was called “America’s Richest City” at the time.

The Delta Saloon and the Bonanza Saloon offered drinks, rooms, entertainment, and card games by 1863. The Delta Saloon features a faro table called “The Suicide Table” because it reportedly caused the suicide of three busted gamblers.

In Old West legend, former dentist-turned-gunslinger “Doc” Holliday was a notorious gambler and saloon dweller as well. More than a century later, another former dentist tried his hand at gambling in Old West saloons.

Vincent “Doc” Malfitano, a former dentist from Antioch, CA, bought the Delta and Bonanza Saloons in 2015. He was approved for a liquor license, and decided he wanted to bring back gambling to the old saloons, starting with 138 slot machines.

But the Control Board denied “Doc” a gaming license. When filling out his gaming license application, “Doc” omitted some important information from the form. Investigators claim Malfitano failed to mention a citation he received for obstruction of a police officer, along with several lawsuits and tax liens that had been filed against him.

Once denied a gaming license, an applicant is added to the Board’s ‘gray list’ of failed applicants. There are over 140 people on that list, and “Doc” Malfitano recently appealed to have his name removed before the five-year waiting period for reapplication.

The regulators keep a list of failed applicants because once a gaming license has been denied a third time, the applicant will never hold a gaming license in Nevada. The gaming license procedure is thorough and time consuming, designed to shield Nevada from dodgy casino owners with mob connections, like those who spawned early Las Vegas.

“Doc” Maltifano asked for permission to lease his casino floor space to another licensed vendor while he was applying for a gaming license. The Board sent his request back for review. According to the Las Vegas Review-Journal, Control Board member Terry Johnson explained the situation to “Doc” using baseball metaphors.

“Mr. Malfitano, this is your second at-bat,” Johnson said. “If you strike out on that third time at the plate, I think it’s game over.

Disclaimer: All images are copyright of their respective owners and are used by USA Online Casino for informational purposes only.